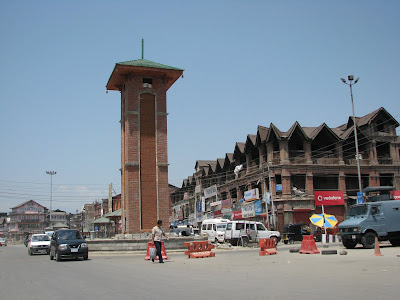 
“How shall I write its praise? As far as the eye could reach flowers of various hue were blooming, and in the midst of flowers and verdure beautiful streams of water were flowing: one might say it was a page that the painter of destiny had drawn with the pencil of creation. The buds of heart break into flower from beholding it.”


Peace in Kashmir is a delicate illusion. The placid calm of magnificent Dal Lake in Srinagar can be confused with peace. But Dal Lake has been silent for centuries. So how does one measure peace in the Valley? One need not take a dip in Dal Lake to measure the depth of peace. Peace floats on its surface in Shikaras and houseboats. Floating Shikaras are a sign of peace. The absence of any human activity over Dal is a proof that all is not well in the “earthly paradise”, a phrase uttered by Mughal emperor Jahangir.
The present trouble began on June 5 when Tufail Ahmed, a 17 year old student who passed SSC exam with distinction, was shot in head by security forces while he was playing in Ghani Memorial stadium. This gave rise to protests in northern areas of Kashmir. For the next 14 days, protests and stone-pelting followed. Omar Abdullah government did nothing concrete to contain the situation. The flashpoint came only on June 19, the day this writer landed in Srinagar. Mohammed Rafique Bangroo – a shawl weaver who has lost seven members of his family to security forces – was severely beaten up by CRPF (Central Police Reserve Force) and breathed his last a day later. During his funeral procession on June 20, people shouted anti-India slogans (One of the most famous slogans of the past 60 years is: Hum kya chahate hain?....Azaadi…Azaadi…Allah-o-Akbar). CRPF fired on the funeral procession resulting in the death of Rafique’s cousin, 17-year old Javed Ahmed Malla.
On June 21, CRPF camp was attacked in Sopore by militants of self-proclaimed Jamiatul-Mujahideen in which one CRPF died and a dozen got injured. When people protested on June 25 about the “fake” encounter, CRPF went berserk and killed 17-year old Firdous Ahmed Kakroo, a farmer and 18-year old Shakeel Ahmed, an electrician. 22-year old Bilal Ahmed of Sopore was shot in his throat when he was watching a protest march against rampant killings. More deaths followed in Baramulla, Anantnag and Srinagar.
Where was Omar Abdullah for almost a month?


Omar Abdullah, chief minister of India’s only Muslim-majority state entered into the picture only on June 19. The local media reported that Omar Abdullah was “extremely angry” over the death of Tufail Ahmed. He came down heavily on CRPF officers. Later, he addressed a press conference.
Is this the way to dissuade street anger?


Street anger can only be contained by stepping on the street. Omar Abdullah realised this only on July 5 when he visited Baramulla and patiently listened to peoples’ grievances. Contrast this with the behaviour of his grandfather, the late Anwaar Sheikh Mohammad Abdullah, the lion of Kashmir. On October 4, 1947, addressing Kashmiris, Sheikh Abdullah said Rajas and Nawabs had no right to act on behalf of the people; the people must speak for themselves. Sheikh Abdullah said this as a response to Maharaja Hari Singh’s desire that Kashmir should remain an independent state.
Central government does not seem to have any concrete solution to the present crisis of Kashmir. Deployment of army may bring transient relief but in the long run it will further alienate Kashmiris. A territory cannot be ruled by application of force. As Pandit Kalhana, the first celebrated historian of Kashmir wrote in Rajtarangini:

Ashoka the Great and his soldiers brought Kashmir under the control of Mauryan Empire and made Srinagar its capital. But it did not last. In fact, spiritual merit of Buddhist missionaries had more impact. Same was the case with arrival of Islam. The message of Hazrat Bulbul Shah and Shaikh Nuruddin had a lasting impact.
Why do Kashmiri Muslims indulge in Kani Jung (stone-pelting)?
If only a stone can change the destiny of a nation. A stone is no equivalent to AK-47 which was once a popular form of Kashmiri resistance. Perhaps to a Kashmiri mind stone-pelting is the only way they can draw the world’s attention. A psychologist will term this as a sign of frustration and helplessness.
A thick layer of humiliation has formed over Kashmiri mind. How would one react if forced to prove one’s own identity? In one’s own state? To a Kashmiri, a valid identity card is his passport to nationalism.
Every nook and corner of Kashmir is guarded by CRPF. In the words of Pratap Bhanu Mehta, “I cannot imagine what it is to live like under half a million troops…”
So when will peace return to Kashmir? The last line must be left to M.J. Akbar:

“Kashmir will never be at peace with itself as long as the mazar of Sheikh Mohammad Abdullah needs to be protected with guns.”

Sir,
Can anybody shake to central govt from its slumber and ask what the hell is going on in Kashmir. While Kshmiri people wants justice, instead of it govt imposed Army on them. Why our govt needs Army every time to tackle any crisis, they need Army to tackle Maoist they need Army to deter protest of Kashmiri civilians, why it is so? And where was Omar Abdullah, he became puppet of Central govt. As per my assumptions Kashmiris becomes rebellions by force not by choice.

Trust muslims to pussy foot around Kashmiri separatism. J&K gets 11 times central govt funds as compared to other states and yet these sunni fundamentalists led by Gilani perpetrate violence. The article doesnt condemn their separatism..typical.